On vacation! Back in the New Year! 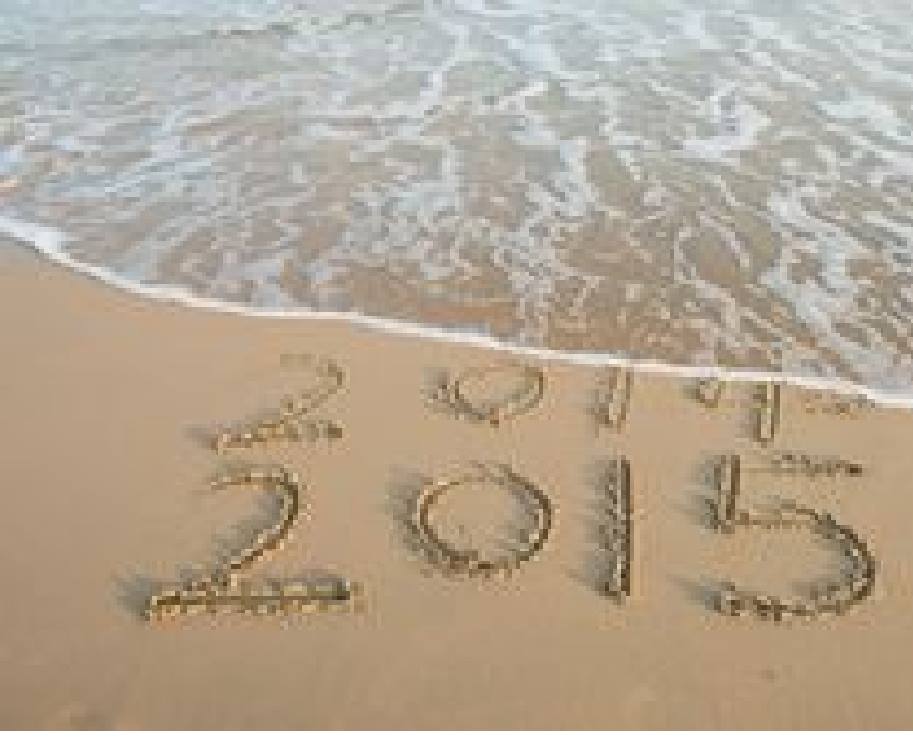 Happy New Year ~ here’s a short version of the column for the Lovely Powerful Full Moon on Sunday January 4, 2015!!  Use it to launch your intentions for 2015! 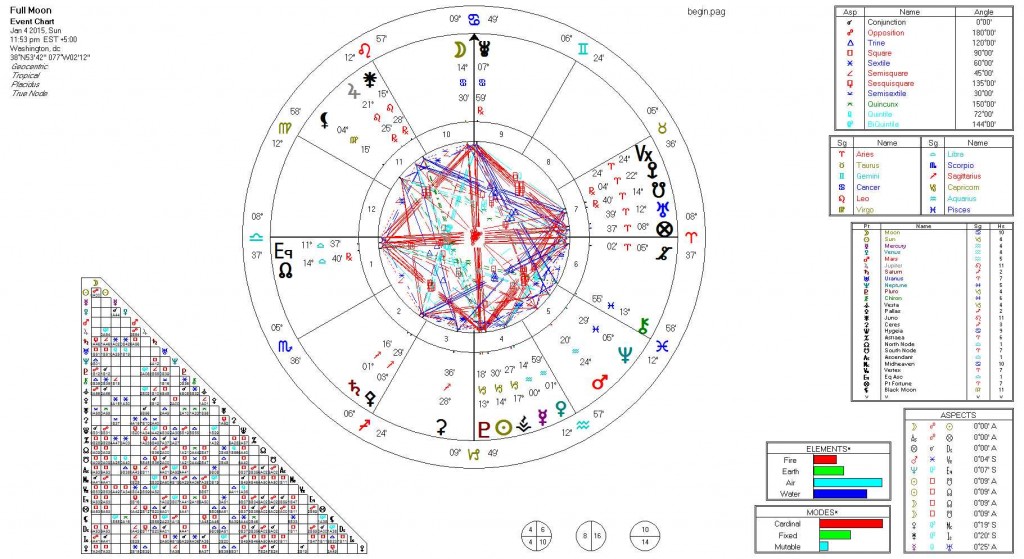 Void Moons in the Week Ahead:  When the Moon is Void, it is wise to avoid making important decisions as they tend to be unrealistic, and subject to false starts, errors or unexpected hassles.  Avoid being concerned with things beyond your spiritual center.  It is time for subjective, spiritual and non-materialistic concerns.  Kick back, let life flow, and center yourself.  Connect into your essential oneness with the Universal Forces.

The first Full Moon of the year is on Sunday January 4, 2015 and forms a very active Cardinal cross with Capricorn Sun nestled next to Pluto and opposite Cancer Sun. Think back to early July 2013 to see the beginning cycle culminating now.  The Sun and Moon TIGHTLY square the Nodes of Destiny as well as Uranus in Aries.  In the chart cast for Washington, DC., the lunation and the Cardinal Cross is angular and full of energy to make things happen.  Expect lots of unplanned endings or exits of people and relationships that got this far but don’t have the energy or the will power or desire to go any further.  Often we have significant outer planets JUST enter a sign and the first lunation (or major shift of energy) sets the new energy of change off.  The sense of exhaustion of Saturn in the last bits of Scorpio kind of rallies after it has crawled into Sagittarius to say “You know? I just can’t do this anymore.”  And Saturn marks the ending of a situation so the new energy can come in.  The first three degrees and last three degrees of every sign are where the MOST significant changes take place as the energy is unstable and either looking to be causing trouble or making changes as it finishes or starts something.

You can see the POWER of the Full Moon by looking at the red lines in the middle of the chart and noting the Cardinal Cross they form.  Pluto and Uranus, our planets of change and power are integral to the energy of the lunation.  Both Mercury and Venus changed signs into Saturn or Uranus ruled Aquarius~ they will take this Full Moon energy and run with it.  Expect a wild ride full of ideas, revelations and action.  Nothing quiet about THIS Full Moon.  The Grand Trine in Fire continues to pulse fire energy into the world ~ this time with Ceres out of bounds in Sagittarius inviting us to come home to the profound mother energy that nurtures us.  Cardinal Cross via the planet of change, Uranus.  Reconnect with source and be nurtured.

The Sabian Image for the Sun at 14: 31 Capricorn is IN A HOSPITAL, THE CHILDREN’S WARD IS FILLED WITH TOYS

Lynda Hill’s interpretation of it is:

Commentary: ‘In a Hospital, the Children’s Ward is Filled With Toys’ brings to mind an image of children in varying states of health. They are in need of care, with doctors and nurses going about their business. There’s the need for vigilant duty for the physical and emotional needs of ‘The Children’. Some ‘Children’ will be playing with the ‘Toys’, whilst others may be sleeping or too ill to respond with much energy or enthusiasm.

Oracle: There may be a need for caring shows of affectionate concern, either for yourself or others. Simple things done to promote healing can bring great relief to all concerned. The fact that ‘The Children’s Ward is Filled With Toys’ reflects a generosity of spirit. Service and the gift of healing are given, especially to those who are younger or less able to look after themselves without any expectation of reciprocal giving. The purpose of the ‘Toys’ is to give the ‘Children’ a special treat and is an acknowledgment of their value in society along with the community’s concern for their welfare and good health. In times of healing there is a need for simple pleasures and rewards to raise one’s spirit. Showing kindness and nurturance to those who are in need can lead to faster healing and allow people to take their place back out in the world again. Listening to the needs of ‘The Children’ is very important, as they can provide clues as to what is really causing problems or happening in their lives. This can picture where many kinds of healing methods can be employed, anything from ‘Toys’ and gadgets all the way up to state of the art, up-to-date technology. Sometimes a simple smile, a special treat and some soothing words of encouragement are more healing than one can at first imagine.

Caution: Making a large generous show when one doesn’t really care. Being dogmatic. Feeling in charge of healing and not listening to what others have to say. Using gadgets instead of simple human caring. Fear of things such as needles, etc. Being greedy and wanting all the toys.

A hospital is no place to be sick. Samuel Goldwyn

Society is a hospital of incurables. Ralph Waldo Emerson

Do not mistake a child for his symptom. Erik Erikson

We are so fond on one another because our ailments are the same. Jonathan Swift

One of the most difficult things to contend with in a hospital is the assumption on the part of the staff that because you have lost your gall bladder you have also lost your mind. Jean Kerr

In this era of affluence and of permissiveness, we have, in all but cultural areas, bred a nation of over privileged youngsters, saturated with vitamins, television and plastic toys. Judith Crist

The Sabian Image for the Moon at 14:31 Cancer is A GROUP OF PEOPLE WHO HAVE OVEREATEN AND ENJOYED IT

Lynda Hill’s interpretation of it is:

Commentary: ‘A Group of People Who Have Overeaten and Enjoyed It’ is an image of people consuming to their fill and having a good time of it. It seems they had a big appetite and have over indulged themselves, and are now feeling satisfied. They have taken take time out to satisfy their hunger and ‘Enjoy’ the leisure of catching up with what’s going on with others. There is a certain measure of pleasure and satisfaction, but it is probably only temporary, and may need to return to work. This can be difficult, as overeating can lead to dulled senses and an inability to make intelligent decisions. People become energetically bound up in digesting what they’ve “consumed”, while the body is preoccupied with handling the load. This can make the mind and body slow and, sometimes, lazy. This Symbol can picture enjoying “consuming” anything, not only “eating.” They probably enjoy many of the good things in life.

Oracle: It may be that you, or someone else, have overindulged in material objects or success. For now, enjoy your good fortune. Beware, however, as sometimes “feeding frenzies” can turn into issues that need to be sorted out later. Problems can be experienced through overspending, overeating, putting on weight, etc. Constantly overeating or overspending in an attempt to feel better can lead to issues of self-worth, greed and debt. There is possibly a need to curb this indulging. Realize when it’s time to return to work, and to be productive instead of just swallowing, or “consuming” more and more. In fact, there may be a need for “tightening the belt”. Commodities, like food, etc., may running short now due to extravagance or excess. Remember to say Grace in thanks for the good fortune you have.

Keywords: Consumerism. Communal cohesion through indulging in the senses. Satisfied hunger. Commercialism and longing to own things. Eating disorders. The right of everyone to enjoy food and nourishment. Big business. Success. Enjoying “the good life”. Having plenty. Abundance. Temporary fulfillment.

The Caution: Self-indulgence through the senses. The “haves” and the “have-nots”. People going without so that others can have more. Monopolization. Bloating. Feeling that one deserves everything on a platter. Overweight. Bad nourishment. Eating binges. Indigestion. Obsession with ownership. Deprivation. Exploiting resources. Overspending. Gluttony.

One weakness of our age is our apparent inability to distinguish our needs from our greeds. Don Robinson

Life is short. Live it up. Nikita Khrushchev

Don’t dig your grave with your own knife and fork. English Proverb

I saw few die of hunger; of eating, a hundred thousand. Benjamin Franklin

Never eat anything at one sitting that you can’t lift. Miss Piggy, Muppet character

Some people wanted champagne and caviar when they should have had beer and hot dogs. Dwight D. Eisenhower

Gluttony is not a secret vice. Orson Wells

Never eat anything bigger than your head. Kliba

Anne’s Three Radio Shows and Two Recommended Shows Recap:  Listen in to the podcasts via iTunes or by the website links.

Scorpios Talking:  We will be on vacation until January 8, 2015!

Access Astrology: We will be on vacation until January 7, 2015!

Venus Unplugged: Llorraine Neithardt with Venus lessons for all!! For Jungians, dreamers, poets and visionaries this podcast helps with your individuation and your understanding of Venus!

CG Jung Speaks! There are great readings from Jung! Tune in!  Kendrick Norris, Ph.D. made a wonderful series. He reads excerpts from Jung.  If you are working on individuating, take the time to listen in!

Lynda Hill’s work appears with her permission.  Check her out at Sabiansymbols.com

Full Steam Ahead with Mars, Saturn, & the Moon